The history of the Vleeshuis goes back five hundred years – well into the Middle Ages. Until after the French Revolution the Antwerp meat cutters, the oldest trade in the city, used it as their base. As well as using the building as a guildhall, they also used the listed building as a location to sell their meat.

The current Vleeshuis replaced the previous building in 1250, which in turn was substituted for an even earlier building. The Vleeshuis from 1250 was commissioned by the Duke of Brabant at the expense of the city. It likely served as a slaughterhouse as well as a butchers and controlled the meat trade.

At the beginning of the 16th Century, the Duke gave permission to build a new meat market. It was fully paid for by the butchers guild and was twice the size of the previous building. It was a butchers as well as a guildhall – the back of the ground floor hall also houses the ‘guild chapel’.

1841: Splitting up the Vleeshuis

In 1796 the French abolished the guilds and subsequently the Vleeshuis was sold three years later. The butchers bought their own businesses back and resumed their activities, but on a limited scale. They rented out the main part of the building, and later in 1841 sold it to a wine merchant. It was unecessary for him to use the entire building, so he split it up; the ground and upper floors became warehouses and the first floor was turned into a space for theater and painting workshops.

The Vleeshuis as we know it today, is home to more than five hundred years of history. It is a wonderful example of brick and sandstone architecture. When you enter the building it feels as though you are inside a church, but from the outside, with the turrets and towers, it is clear that this is an example of civil architecture. This certainly doesn’t make the building any less impressive. 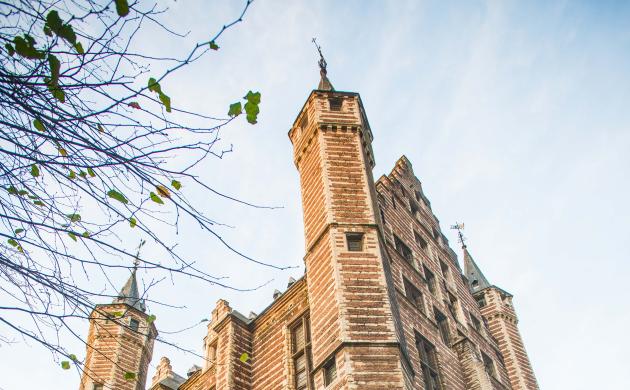 Virtual tour - Vleeshuis behind the scenes

Normally the museum visitor only sees the cellar and the ground floor of the Vleeshuis. But the Vleeshuis is much more than that. Curious to see the other five floors? A sneak peek with this virtual tour. Want to see it all? Book a tour behind the scenes!